Can You Radically Welcome Moles to Your Yard? 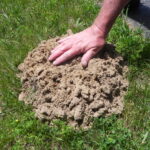 It’s that season again. Recently we spotted a symmetric dirt cone poking up in our lawn. Fortunately, it wasn’t an early-stage volcano about to erupt. Rather, a mole pushed dirt out of the way so it could continue tunneling.

People hate moles for forming similar dirt piles and their humped tunnels that lawnmower blades sometimes catch. Here’s some basic mole information to help change perspective from a “problem” to a resource and “radical welcoming”.

Moles are small mammals of several species that live across North America, Asia, and Europe. They make their living tunneling through the earth to find earthworms and other invertebrates to eat. Contrary to popular belief moles don’t eat plants or roots. They make two types of tunnels. One is fairly deep and is a mole’s highway. It’s for transportation. The other is the familiar humped tunnel moles create to find food that usually is just below the soil surface. Every once in a while, a tunneling mole needs to get rid of some dirt, so they push it to the surface, creating a molehill.

People confuse moles with gophers. Both are small tunneling animals, but they are very different in these ways:

By softening and aerating the soil both types of animals promote long-term soil health.  Often an area bordering a mole tunnel will have the greenest grass in the lawn, for example.

Mole dislike is so intense that many people work hard to kill any that dare tunnel in their yard. Here are two common mole weapons and why we don’t use them:

What We Do with Moles at Winding Pathways

We view our moles as another interesting and beneficial animal that shares our yard. Yup, mole tunnels kill a strip of grass in the short term, but in the long term, mole activity improves the soil. Worms and most other invertebrates contribute to soil health, so we know if we have moles, we have a healthy lawn.

What to Do About Moles

There are two ways to deal with moles. First, a homeowner can set traps and poison and attempt to kill beneficial animals. Second, forget trying to “get rid” of moles. Instead, just tamp down their tunnels before mowing, and don’t worry about them.