Coppicing. Why Do Trees Re-sprout?

What? Coppicing? That word almost sounds dirty. Well, it’s not.  It is a good way to help derecho doomed trees live on!

We recently hosted friends to mark the first anniversary of the August 10, 2020, furious derecho that leveled around 70% of trees in the Cedar Rapids area.

Many people used words like devastation and destruction to describe what happened to trees in both forests and neighborhoods. The damage was truly shocking. 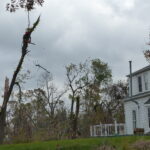 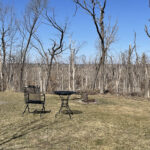 All winter we looked on broken trees. 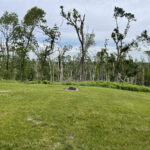 Springing Back from Derecho.

We wanted to show visitors a miracle of nature stimulated by the storm. Just east of our house stood a couple of basswood trees. Few of nature’s scents are as delightful as what comes from the blooms of this tree. Bees will fly three miles away to gather the nectar. We just enjoy the scent.

Basswoods have a problem. Their wood is soft and weak. When the derecho hit, they quickly snapped off, leaving a tangle of branches in our yard. Nearly a year later they demonstrated the power of near-perpetual youth. 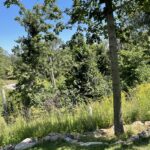 In the middle our basswood looks like a fuzzy brush. 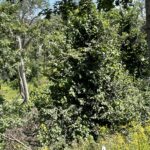 This basswood wants to live!

Basswoods, along with many other deciduous trees, readily coppice. If a tree is cut or blown down it sends shoots up from the stump. Our basswoods quickly sprouted this spring, and we’re seeing others sprouting from stumps in suburban yards.  Many species of deciduous trees also send up shoots. Ashes, oaks, and honey locusts are common sprouters. Evergreens don’t. If a pine or spruce is cut off, the stump dies.

In Europe coppicing is a method of woodland management. A tree is cut down and allowed to resprout. Because the regrowth is coming from a well-established root system, sprouts grow like crazy. The sprouts are managed carefully. The most hearty sprout is kept and the others cut off. Within five to twenty years, or so, the hearty sprout is big enough to cut for firewood, fence posts, or walking sticks. Then the stump resprouts again.  Some trees have been coppiced for hundreds of years. 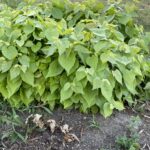 Basswood trees are champion sprouters. Our stumps now look like balls of green leaves from all the sprouts radiating from the stumps. This fall we’ll clip off all but the most vigorous one. It will quickly form a new tree. That’s better, easier and cheaper than grubbing out the stump, then buying and planting a replacement tree. 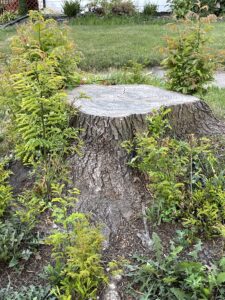 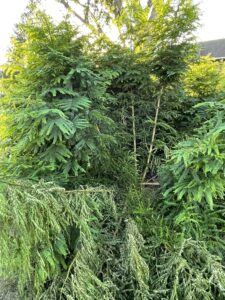 A look at the stems of new sprouts 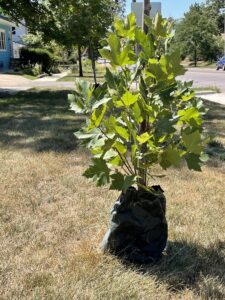 the original new tree died, but sprouted from the bottom. 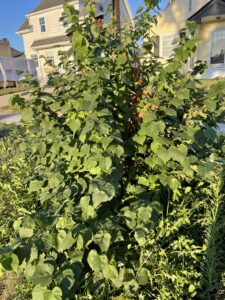 An Internet search will turn up much information on coppicing. We like the website of the Midwest Permaculture Center.