Back in October, we took a gamble. We bought an electric snowblower. Our driveway at Winding Pathways is about 440 feet long, and Iowa gets plenty of snow. It’s too much to shovel, so years ago we bought a gas snow blower. It worked for the first winter but then it started throwing belts off the drive wheels. Fixing was tedious and tenuous. So, we sold the beast and bought an EGO battery-powered two-stage snowblower.

We hoped it was a good decision. Would the blower be up to clearing such a long driveway? Would it hold up to hard use?

A  heavy wet snowfall on December 28, 2021, gave us a chance to test the new machine. It did just fine. After clearing the entire driveway, the batteries still had charge to them. We could have done more.

It’s our prediction that gasoline-powered lawnmowers, hedge trimmers, blowers, chainsaws, and snow blowers are becoming obsolete. They’ve already been banned in California because they pollute the air more than cars.

It looks like our decision will pay off. We’ve now replaced all our gas-burning outdoor equipment with battery equivalents……except for one chainsaw. That may go soon. 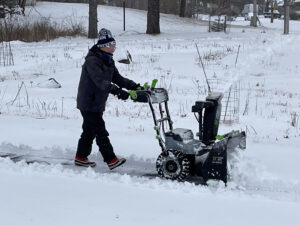 The EGO snowblower cut through the heavy snow easily.