Fire In the Yard!

A few minutes after we dropped a match into our front yard’s dry prairie grass, the wind unexpectedly puffed up. Almost as fast as an explosion, eight-foot flames roared up from the burning grass. Our yard was on fire. The heat was intense as the fire zoomed toward our house. 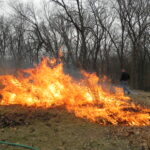 The grasses catch quickly and subside as quickly.

Were we worried?  Nope. Between the fire and the house was a three-foot mowed lawn, then our ten-foot-wide driveway and finally another 30 feet of mowed green lawn.   Asphalt and green lawn don’t burn. When the raging blaze met the first strip of lawn it almost immediately calmed. Soon all the dry prairie was consumed, and with a final weak smoke puff, the fire was out.

From many years of experience with fire and its impact on the land, we know that our annual burn will stimulate a rush of colorful wildflowers next year while toasting any unwanted brush that tries to establish itself in our grassland.

It seems like almost every evening newscast shows photos of burned-out homes, usually in California, and reports of wildfires rampaging across the landscape. It’s easy to become fire scared without understanding how, where and why fires burn, their benefits, and how to protect a home from a wildfire. News reports and photographers frequently show the worst appearing spot and never return months later to show the profusion of wildflowers and tree seedlings the burn created.

As a former Forest Service Hot Shot, and with nearly 40 years of prescribed burning in prairies and oak savannas, Rich has much fire experience. Marion has been tending prescribed burns for years. They annually burn the prairie and savanna surrounding their home in Cedar Rapids, Iowa. Here’s their perspective.

Many of us remember grade school history lessons telling of Europeans discovering a forest primeval when their sailing ship landed along the East Coast.  We often have the notion that North America in 1492 was pristine and untouched by people, allowing trees to grow into an immense phalanx. It wasn’t so.

Historical ecologists know that North America’s vegetation had been altered by people ever since humans colonized the continent some 11,000 years ago. The Eastern Forest that European explorers found had burned frequently, with most fires started by Native Americans. This created an open woodland of massive trees. Sunlight reached the ground, stimulating a dense growth of wildflowers and grasses. There was little brush, making it relatively easy to walk through the woods.

Prior to the settlement of North America by mostly Europeans, the land burned often enough that vegetation became dependent upon frequent fire. Indigenous people set fires because the resulting landscape produced more food from an increased abundance of wildlife and acorns, berries, and other edible plants stimulated by fire. Europeans generally viewed fire as an enemy and began suppressing it almost as soon as they colonized the continent. This fire aversion is reinforced by modern newscasts showing burned-out homes and towns.

Like the weather, fire is a natural force that sculpts the landscape and its vegetation.   Many ecosystems decline in health when years go by without the rejuvenating impact of a burn. Areas suffering from fire starvation tend to build up flammable brush and tree debris, creating a potentially devastating future fire.

Knowledge of the predictable aspects of a fire helps us manage burns near our home at Winding Pathways as well as helping fire managers plan prescribed burns and fight out-of-control fires. Fires generally burn most vigorously when:

We take all these factors into account before we start a fire. For example, if we want our fire to move slowly and be easiest to control, we set it to run against the wind, downhill, and at a time when the humidity is high, usually before 10 a.m. If the area is reluctant to burn, we’ll do it when the humidity is low and plan it to go with the wind and upslope. 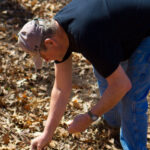 Start the burn into the wind. 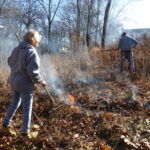 Work together to manage the burn. 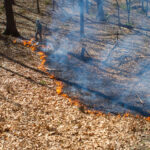 Our son-in-law who also is skilled at managing burns helped us one spring. 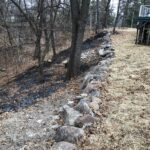 The side fire burned uphill slowly. 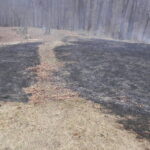 Fire stops at the firebreak. 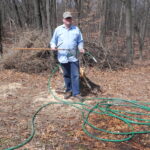 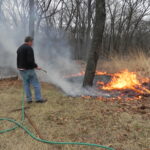 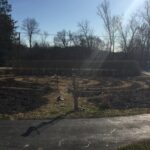 Pattern of fire after the burn.

Early in the season, we get a fire permit from the county.   It requires us to check the air quality and only burn on days when it is good. We call the sheriff’s office before we burn so they are aware of our activity. We also prepare firebreaks and reinforce our nonburn able asphalt driveway with mowed strips of lawn.  Before lighting it, we have our water turned on, the hose stretched out and ready if we need it, and have a backpack fire pump called a “Smith Indian” ready to use to stop or slow the burn.

It is tragic when communities and homes are ignited by wildfires. Almost all are in Western coniferous woodlands or in California’s chaparral vegetation. These plants burn with extreme heat and create embers that blow in the wind, igniting new patches of forests and homes. Ironically many western plants, including Lodgepole pine and chaparral require fire to seed or be invigorated, yet people often disregard the risk and build fire-prone homes within historically fire-prone areas. Building a home in a flammable wood is akin to building in a floodplain or on a bluff over the ocean. It’s risky. Always have good insurance and follow fireproofing directions provided by the US Forest Service, insurance companies and others. In contrast, fires in Eastern deciduous woods rarely ignite homes. Here are a few resources for tips on how to reduce the odds that a wildfire will ignite a home:

Sierra Club and Protecting Your Home from Wildfire

The US Forest Service has extensive information online on how to protect a home from fire.

We appreciate watching the impact of prescribed burns on the plants at our home at Winding Pathways. In the spring following a fall burn our savanna ephemeral wildflowers thrive and grace our property with color. By summer prairie wildflowers dance in the wind in our front yard.  We’ve attached a few photos of our fires and resulting wildflowers. 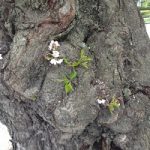 The ancient tree sprouted leaves and flowers all over. 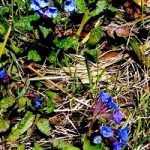 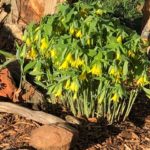 An early wildflower for pollinators. 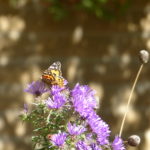 Fall wildflowers are an important food source for insects and birds. 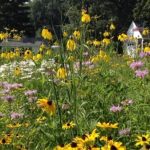 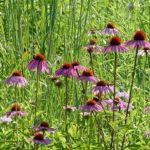