How Did Obsidian Get Around?

Obsidian on the Move

We have it easy. If we need to carve a roasted turkey, chunk up an apple, whittle a stick, or shave off a beard we just have to buy a knife or razor blade. They’re made in hundreds of shapes and configurations and sold in dozens of stores.

It wasn’t always that easy. A fascinating article about archeology in Yellowstone National Park is in the January/February 2021 issue of SMITHSONIAN Magazine. It gives a glimpse into yesterday.

Growing up in the 1950s and 1960s we were told that, before Columbus, Native Americans lived in primitive tribes that lacked technical sophistication.

The information was downright wrong. 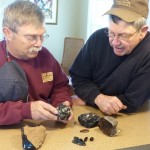 Decades of research by archeologists and historians have proved that Native Americans had complex societies and vast ability to live sustainably off the land. The Smithsonian article gives a glimpse of how pre–Columbian North Americans made amazingly effective tools that were carried around the continent on vast trade networks.

Early Americans needed sharp tools to make clothing, butcher game, process plants for food, and make weapons and ornaments. They lacked steel but had one thing almost better than metal – obsidian and other rocks that could be fabricated into outstanding tools. Even today, no steel knife is as sharp as an obsidian blade.

Between Mammoth and Norris in Yellowstone Park is Obsidian Cliff, the source of some of the best obsidian in North America. It had been mined by Native Americans for thousands of years and traded widely. Obsidian artifacts can often be traced to their place of origin and some items made from Yellowstone rock have been found as far away as Hopewell in Ohio.

Origin and Sources of Obsidian 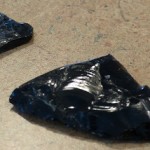 Obsidian is formed when molten rock with high silica content cools rapidly, creating a natural glass. It fractures in fascinating patterns with keen edges. A skilled person can craft amazingly sharp and beautiful cutting tools from it.

Obsidian is found on most continents and has been used by people in Africa for hundreds of thousands of years. In the United States it’s found in Arizona, Colorado, New Mexico, Texas, Utah, Washington, Oregon, and Idaho, all western states, but some have been discovered in Pennsylvania and Virginia. It’s always an indication of past volcanism.

Obsidian on the Move

It’s fascinating to think how obsidian got from Yellowstone to Ohio. Obviously, someone, or maybe many people in a relay, carried it the 1700 miles to Hopewell. Obsidian was so valuable that it made the trip worthwhile. It proves that Americans long before Columbus were involved in mining, long-distance travel, commerce, and manufacturing.

Winding Pathways is in Iowa. Nearly our entire state has a bedrock of limestone, a sedimentary rock. We lack evidence of volcanoes so no natural occurring obsidian has been found here. However, obsidian wasn’t the only rock used in trade and tool making. Iowa archeologists have discovered tools made from rocks that had been carried long distances. 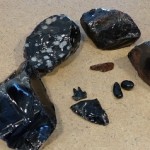 A volcanic glass, Obsidian occurs in volcanic areas such as the western United States. 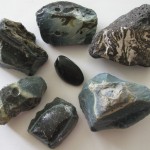 Obsidian has one characteristic that slag generally lacks – a hint of translucence. 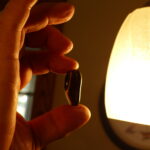 According to Iowa State Archeologist, John Doershuk, there are dozens of varieties of chert that can be sourced to specific areas, knife River (ND) flint, Hixon silicified sandstone, jaspers, chalcedonies, and other rocks that came from distant points but were made into tools found in Iowa. Native people also transported and used copper and shells long before Columbus.

Winding Pathways is on an ancient sand dune high above Indian Creek. We’ve never found a natural rock on our property but love looking for stones when we walk along the Cedar River or other Iowa waterways. We often find chert that’s not been worked into tools but is still an interesting rock, and we keep looking for artifacts.

We know how lucky we are. If we need a new knife to slice a loaf of fresh bread, we don’t need to walk to Yellowstone to gather obsidian but can easily and inexpensively buy a knife at many stores near home.