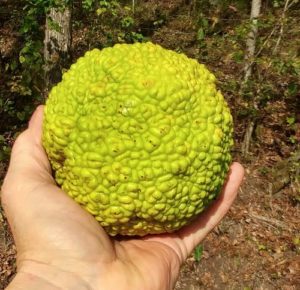 This fall we’ve noticed Osage Orange fruits for sale in grocery stores and roadside stands. They are fascinating and have a delightful fresh citrus scent.

These are often called Hedge Apples, and many people call the tree they grow on Hedge. More properly the tree is called an Osage Orange and the fruits are Osage Oranges. To add confusion some people, call the tree Bodark because its springy tough wood was once used to make bows.

The Osage Orange once lived in a relatively small area of Texas and Oklahoma but because it is tough, drought resistant, and thorny it was commonly planted in places outside its native range. The tree’s branches twist in many directions with thorn-studded twigs. When planted in a row, the trees created a living fence that cattle wouldn’t cross. In the days before barbed wire was invented millions of Osage Oranges were planted for fences.

The wood is hard and heavy and is outstanding for firewood, but cutting it is challenging because of all the thorns.

Does a Hedge Apple in the basement keep insects away?  Many people think so and annually buy or collect a few. We think it’s an ineffective way to keep out insects and find caulking entry points better for excluding bugs from our home.

In recent years an oil extracted from hedge apples has been used in shampoo and hair conditioners, and many people love the product. It is marketed as POMIFERA in honor of the tree’s Latin name Maclura pomifera.  Todd Johnson, a native Bloomfield, Iowan, has cashed in on the Hedge Apple industry.

Hungry squirrels sometimes eat the seeds hidden inside hedge apples and livestock sometimes dine on them but they are inedible to humans.

There’s no harm in putting a few hedge apples in the basement but don’t count on them to keep away bugs.