Early one September morning a disturbing sight greeted us. The metal post holding a suet feeder high off the ground was bent. The feeder was gone. After a search we finally found it where our nocturnal thieves had abandoned it after devouring the suet.

Many people are frustrated when daytime squirrels gobble up feeder seed, but other mammals visit feeders unseen after sunset. Not all are as rough on feeders as raccoons and all night visitors are interesting but they can also be frustrating. 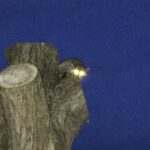 Raccoons are strong and hungry.

Up in the wee hours sleepless or just to get a snack? Shine a flashlight beam on the feeder. You may spot raccoons, deer, flying squirrels, or even a bear! They all like birdseed and some relish suet.

Raccoons live nearly everywhere, even in big cities. Our son once sent a picture he took of one raiding a dumpster in New York City. Occasionally they are out on cloudy days but mostly they are nocturnal.

Raccoons are common, numerous, powerful, and gregarious. Sometimes a whole family visits a feeder after dark. Excellent climbers, if they can’t shinny up a slippery metal pole to reach seed, they might just bend it over as they did at Winding Pathways. They love suet but also eat corn, sunflower seeds, and many other foods people put out for birds.

One of the most endearing animals to visit feeders are flying squirrels. There are two species but both are nocturnal and are almost never seen during daylight. Flying squirrels often live in big dead hollow trees and are more common than most people realize.

Flying squirrels are misnamed mammals. They can’t fly. They should be called gliding squirrels, for they spread loose skin on their sides and glide from the top of a tree to the ground – or bird feeder. These mammals weigh only about two ounces, about half that of an Eastern chipmunk.  In comparison, a mature gray squirrel is ten times heavier at about 20 ounces.

Flying squirrels are shy and beautiful. Seeing one is a thrill. 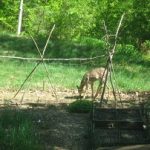 Like raccoons and flying squirrels, deer love birdseed.  Sometimes they visit during the day but we see them more often after dark. If a feeder is well seed stocked in the evening but is empty come morning deer are likely culprits. Look for their tracks and droppings to confirm the visit. 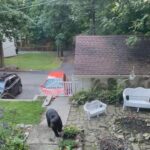 Bears make themselves at home anywhere.

Gads.  Bears at the feeder! Could be. We don’t live in bear country but they are common over much of the United States. Mostly nocturnal, they love birdseed and suet. A 300-pound bear can rip down the most armored feeder and they’re skilled trash can scroungers as well. 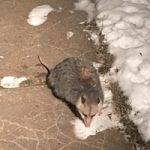 Skunks, opossums, and Norway Rats all love birdseed. Like flying squirrels and raccoons, they are nocturnal. Skunks and possums are native animals that can be comical, but no one wants rats around. They are dangerous pests capable of spreading disease and gnawing on houses.

Feeding birds is entertaining and educational. We love having colorful activity just outside our window. We’re not thrilled when raccoons tear up the feeders, so when midnight raiders help themselves, we bring feeders in each evening.