Carole Teator:  Thank you for inviting my story. And thank you for the column on the catalpa tree. I do enjoy them, particularly when they are in bloom.

This is a story of losing a tree.  Carole shares that it “… helped me realize how deeply one can mourn the loss of a non-sentient being.” 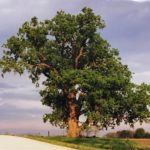 “I recently came across the attached photo of a cottonwood tree that I once knew and this old friend has been on my mind since. It grew along Austin Road, north of Marion, and I came to know it when visiting friends who live nearby. When I could, I would walk to visit the tree and eventually photographed it in every season. It was huge—perhaps 20 feet in circumference?—and it stood alone, between a field and the road. Nearby is a small woodland, the proximity of which may have made the cottonwood seem even more solitary at the side of the road.

“One day, one of my friends who lived near the tree dropped me off at the Cedar Rapids Airport. A terrible storm blew in, delaying my flight and making me very concerned about my friend and her young son, who I knew would be driving on Highway 13 at the height of the storm. When I was able, I called to check on them. She said they were fine, but that the old cottonwood had blown over in the storm. Shock and sadness washed over me, and I was as surprised by this visceral reaction as much as I was by the news. I mean, it was a tree I only saw every few weeks and I only had known it a few years of its life. But it seemed a connection to the past and a sentinel of beauty and solitude that was now gone. I had connected to this tree more than I had understood, or even understand now. I continue to mourn its passing, but I am so grateful for the photos I took of it that remind me of its beauty and grace.”

Bev Hannon: “Your Sunday article on catalpa trees brought back lots of memories.  We had two trees between the sidewalk and street at the house I grew up in, in Manchester, IA.  I loved those trees and founds all kinds of way to use the blossoms and beans as a child.  I think I even used to climb the trees, ‘though not successfully.  I held “tea parties” in the shade under them, serving the early beans in my little tea dishes and of course, decorating my table with the blossoms.

“Unfortunately, the trees are long gone, as well as the house I grew up in.  It burned down, and someone set up a double wide trailer facing the other street (corner lot), not West Marion St., so even my old address is gone.  🙁  But the memories live on.
“Thanks for your good words for Catalpas.”

Marion Patterson: While clearing out the attic, recently, I came across “The Ramsey Table”. This was a roughly fashioned coffee-type table my folks made shortly after we were married and brought to us in Iowa.  Dad had found an 18″ wide plank from the home we lived in Goffstown, NH.  Purportedly, (one of) the oldest in town. The home did pre-date the Revolution and was for sure haunted! One family that lived there was “The Ramseys.” Much to my folks’ bemusement, a friend and I concocted all sorts of adventures surrounding this unknown family.  Thus the name of the table.
Mom placed a variety of sentimental objects in the little shadow box cubbies that Dad had made.  Many of these I later replaced as their meaning dissolved.  Glued-down pennies of significant dates like when we were born, graduated high school and college, got married remained. And, a little memento of “Baby Magaret” a long-lost relative from 1878 Chambersburg, PA, who died in infancy. 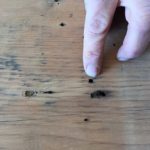 It was time to dismantle The Ramsey Table as we have never had a good place to display and use it.  I did so reflectively.  A further look at the plank revealed some interesting features.  It was a decades-old pine tree with three knots across the middle. As a young tree, it grew fairly fast in New England soil in years when sufficient moisture helped it along.  Later the rings grew closer together until they were indistinguishable. Revealing less moisture and more competition perhaps as it grew.
Most interesting to us were the widely spaced square nail holes!  Their presence and configuration confirmed that this was an old piece of lumber. So, we have kept the plank and are thinking about the best way to honor it and Mom and Dad’s gift of The Ramsey Table.

When I was eight or ten years old Dad helped a friend and me construct a treehouse in a multibranched gray birch tree that grew behind our house in New Jersey. It was mostly platform four or five feet above the ground.

Growing nearby was a tall maple on high ground overlooking Cedar Lake. It was easy to climb trees with horizontal branches perfectly spaced apart. My friend and I carried boards way up in the tree, perhaps 40 feet above the ground, and we made a platform there. We even made a flagpole and hoisted it above the tree’s top.

Grandma Zieger lived close by and saw us high in the tree and alerted Mom and Dad, as a fall from that height would be serious. They were unworried, as they thought we were in the low tree. Only later did they discover the lofty perch and discouraged its use.

In the late 1960s, I found myself in the army as a neophyte infantryman. For a while, I was stationed at Fort Lewis, Washington on the south end of Puget Sound in the rainforest, a land of giant trees.

One evening my company was told to gear up and, squad by squad, we climbed aboard helicopters. Soon we took off in the darkness and not long later landed.  A lieutenant told us to jump out and make a defensive perimeter. We could expect an attack at dawn. It was a big war game, the blue army vs. the green one.

So, we formed sort of a circle as best we could in the darkness and took turns on guard duty all night. Two of us would be awake for an hour while the rest slept.  At the end of an hour, the guard duty guys would wake up the next shift, and so on.

I ended up with the dawn shift and got poked awake around 4:30 in the morning. With a partner, we peer outward searching for danger, but we could see nothing. It’s true that the darkest hour is just before dawn, but as the earth turned toward the sun the land lightened and gradually I could make out the trunks of huge Douglas fir and cedars.  Beneath them was a tree so unusual it riveted my eyes. Small and twisted, it had large deciduous type leaves and looked like it belonged in the tropics. I’d never been in the rainforest before and was so fascinated I stood up to get a better look.

Instantly an M-16 spit out a clip’s worth of blanks. In those days blanks had bullets made of compressed paper. Several splattered on my chest and hurt but did no damage. Within seconds and army “referee” approached, put a colorful tag on me and pronounced me dead.  I was told to walk back to the LZ  (helicopter landing zone).

It was the Pacific Madrone that helped me realize that curiosity about nature can be dangerous. 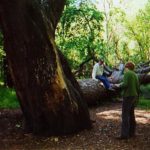 This large silver Maple along Indian Creek just off the Sac and Fox Trail, grew up when the Center was a farm, was flooded regularly, thrived in the dense moist soil and was home to many animals.  Its girth beckoned visitors to wrap multiple arms around its massive trunks and cool off in its shade.  Kids and adults alike loved Old Henry. Cedar Rapidians returning for the Holidays often made pilgrimages to see Old Henry and reminisce about their adventures there.

So, many mourned when its branches started to fall off, when winds toppled large sections of its trunk and when it finally, keeled over from age.  Its limbs lay scattered about and kids still climbed all over them until these rotted away.  But, Old Henry’s passing opened up space for new Henrys to grow. Some are good sized.  Birds and mammals have returned to nest and rest.  Insects and worms still ply the soils.

Perhaps one of the most touching tributes over the years was that each late fall, some kindly soul would leave a garland around Old Henry with a few tidbits for the animals.  Even as Old Henry became littler and littler, this anonymous person would trek out to Old Henry and leave love offerings.  So, Rich was moved when this week he walked past Old Henry, now a tiny stump, and saw a garland wrapped around the remains and a few tidbits for the animals.  A fitting tribute to an old friend. Thank you.