We’re lucky. Scarlet tanagers nest near us. Winding Pathways abuts Faulkes Heritage Woods, a protected 110-acre forest of mostly monstrous oak trees. So, every May we’re delighted as this brilliant bird arrives and sets up home.

Male scarlet tanagers appear at our feeders in mid-May. Females come a few days later. The male’s amazingly brilliant red feathers and contrasting black wings make the bird unmistakable. For only a week or two they visit the orange-colored suet we set out and pick sunflower seeds from silo feeders. Then they disappear. We knew they abandoned our yard to nest near the tops of big oaks in the nearby woods, but they are very hard to spot there, even as they sally forth to catch insects from mid-air catching a meal. Their summer diet is mostly insects. 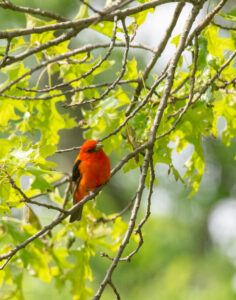 The male scarlet tanager arrives. several days ahead of the female. 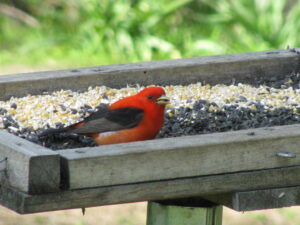 The tanagers willinging come to the platform feeder.

We wondered where they went after nesting and consulted our friend Jim Berry, retired executive director of the Roger Tory Peterson Institute in Jamestown, New York. Here’s what he wrote:

“Once the baby birds fledge, familial responsibilities end and the birds move away from forests to places where they can find food and molt. Often these are old fields and marshes, where they seem to disappear. This is called the post-season dispersal.

They soon replace their brilliant red feathers with duller-colored new ones that help them migrate.” 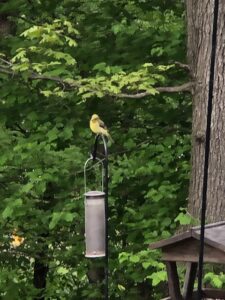 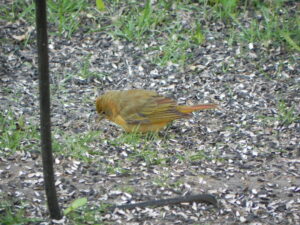 Jim told us we are lucky to have scarlet tanagers come to our feeders. They don’t where he lives in Western New York.

After they molt the birds fly all the way to northwestern South America for the winter. We won’t see them again until next May.

These are breathtakingly beautiful birds that brighten our yard for just a short while each year. We’re humbled to be able to host them.