Smarter Than We Think

Watching backyard wildlife yields amazing sights and education. We recently noticed two things at Winding Pathways that reminded us about how many animals are downright smart.

Both involved a manufactured trap that supposedly catches House Sparrows. We have more of this pesky bird than we’d like so we set the trap under a feeder and baited it with cracked corn.  A few minutes later an intrepid chipmunk entered the trap’s funnel-like door, feasted on seeds, and couldn’t find his way out. We gently released him and set the trap back on the corn.

A few minutes later we were amazed to see the chipmunk back and watch it tunnel under the trap to reach the bait! He’d learned that entering the trap brought trouble and figured out how to safely reach lunch.

Our sparrows are even smarter than the chipmunk. Not a single one entered the trap. Instead they feasted on corn and millet on the ground around the feeder. After a few hours they had eaten all the safe seed but they still wouldn’t enter the trap.

We now have new respect for the intelligence of both chipmunks and House Sparrows. 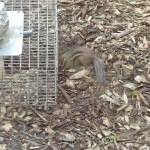 The chipmunk figured out how to tunnel under the live trap to reach the corn. 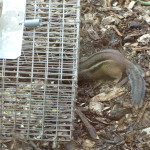 Having excavated, the chipmunk now enters the tunnel to get the corn. 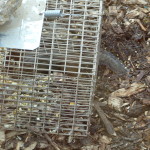 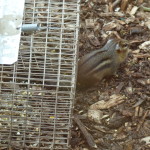 With pouches full, the chipmunk emerges. 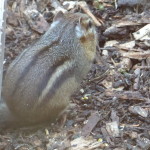 The chipmunk figured how to tunnel under the live trap, gather up the corn and emerged with pouches full.