The Reptile Adventures of a Suburban Gardener 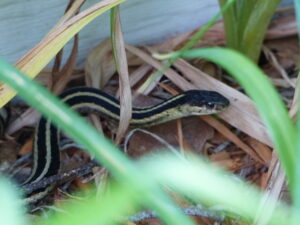 Garter snakes like cool, shady places to wait for a meal.

Just over a year and a half ago, we moved from a home with a suburban postage-stamp-sized yard with little wildlife into a home with a large yard that backs up to a sizable park. Each season we have discovered something new about our new urban “wilderness”. Last spring it was how to identify (and avoid) poison ivy. This spring the theme seems to be reptiles! Earlier this spring I became acquainted with our resident garter snake. Most often it spent time in our vegetable garden but occasionally sunned itself near where I was working in the yard. Though I am not comfortable around snakes I was glad to see him/her – to me a symbol of more abundant life.

How the Adventure Began

Thursday, May 6th seemed like any other lovely spring day. I took myself outside to walk around the gardens and see what was coming up. I walked around to the front of the house to check on hydrangeas I had planted last spring. I had wrapped them in bird netting last year thinking to keep deer from nibbling the tender shoots. To my dismay, I discovered that our resident garter snake had become entangled in the netting, and even worse a much larger snake had also found its way into netting nearby. To my uneducated eyes, this snake looked like a small rattlesnake with a brownish diamond pattern. I was almost relieved that it appeared to be dead. But I knew I needed to rescue my garter snake friend.  I was afraid to do this myself – afraid of getting bitten mostly.

So, I started to call and text everyone I could think of to rescue this snake – and me! My husband who was in a meeting, the nature center, DNR. But, alas, I soon figured out I was going to have to tackle this myself if I wanted the snake to survive. So off to Google I went.

Google To The Rescue!

The snakes had netting in their mouths and wrapped around their bodies, multiple times. Google informed me I would need to gently restrain the snake and use nail scissors to cut it free. So, I put on gardening gloves, found a stick with a small fork to hold the snake’s head, and armed myself with nail scissors. Probably more to calm myself, I talked to my little friend while I cut away the netting. Success! After I freed the garter snake I went inside for a moment. 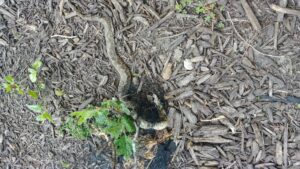 Netting gets caught in the snake’s scales when it tries to back out of the netting. 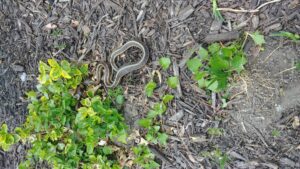 This snake slithered off when freed.

When I came back out – no lie – he/she had found its way into another piece of netting. So, round two – gloves, stick, and scissors. It was clear I needed to remove every shred of that darn bird netting to make sure it would not harm any other creatures. As I was clearing away the netting, I discovered the second snake was in fact alive. Now I had to save it, too! So round three – gloves, stick, and scissors, and the second snake was free. I later learned this is a fox snake.

All Is Well That Ends Well

I haven’t seen them since but I surely hope they are safe, well, and still visiting our yard.