Update on a Young Redtail Hawk 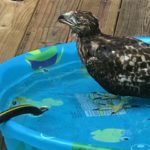 On May 31st just before we were leaving for an Outdoor Writers Association of America Conference, a friend messaged pictures to me of a large bird in her little dog wading pool.  It looked like a hawk of some sort. The day was super hot for late May and the bird seemed distressed.  Soon it wandered off.

Rich and I drove to our friend’s home and looked around, finding the bird burrowed into the cool, wet soil shaking its head as gnats and flies tormented it.  I emailed Dave Coates who has worked with eagle counting and asked if he had contacts for someone to rescue the bird.  He suggested the Mcbride Raptor Center that I knew had closed.

Then, Rich reminded me of Phil who works with raptors at the RARE group. (Raptor Advocacy, Rehabilitation, and Education is now the contact group).

I buzzed True Value on Mt. Vernon Rd. and the staff kindly put me in touch with Phil.

That is where our involvement stopped.  And, I had wondered several times since the outcome. 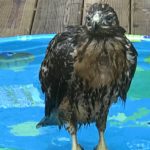 On edge of pool 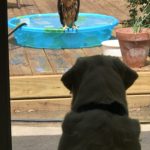 Sizing each other up. 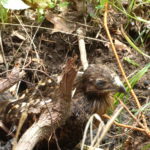 Hawk being tormented by gnats and flies.

Dave emailed me in mid-June because he had also wondered about the outcome.  His email spurred me to follow up. Here is Nancy’s reply.

“The red-tailed hawk was taken to the RARE center by Phil where they fed her, gave her fluids and made sure she was healthy, then returned her to a tree in our yard. They thought the parents would find her and help her until her flying feathers were more mature. She stayed for about 24 hours but then she was gone. We’re hoping she reunited with a Mom hawk. Actually, I keep thinking I’ll see her in the wading pool again someday.”

So, all is well that ends well. This is the second raptor rescue of the season we have been involved in. Many thanks to folks who care enough to follow through.