Weep Not For Your Memories (Sarah McLachlan)

We invited readers to share their fall traditions and memories with Winding Pathways to help us through the 2020 Autumn and Holiday/Holy Days season. 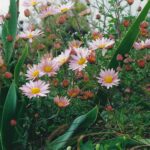 JH- “Every year I tend lovingly to a patch of chrysanthemums that I planted many moons ago in my vegetable garden. It has a place of importance along with my four lilies in this particular raised bed. This plant sprouts in spring and gradually makes
its way skyward until the September coolness brings teeny tiny buds which become a single petaled soft orange sherbert color. I always leave the seed stalks during the winter because I know that birds love the seeds. A sense of peace and joy washes over me as this patch sallies forth in the fall. The bees and butterflies love it as well.

Soon the cold of winter will send it into its deep sleep to wait for another year of gorgeous blossoms.” 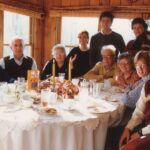 SF- “Many T-givings we spent at Grammy’s.  Everyone sat around the table, Gram at one end, Grandpa at the other. Gram served up the potatoes and veggies, she then passed the plates along down the line to Grampa who put the meat on then it was passed down the other side.  Each of us, uncles and aunts, got our meals. Gram always loaded our plates which was always too much for us kids. One year Gram said something to us that she was tired of us not eating all our food and she was tired of throwing away good food.  Mum stood up and told her we served ourselves at home and we’re expected to eat what we were given. At subsequent T-givings Gram would ask us how much we wanted and then ate what she gave us.  After Grammy passed away usually Aunt Bunny and Uncle Joe came for T-giving at our house on Tibbetts Hill.  Uncle Joe was always fun.” Editor’s note: The family later hosted extended family Thanksgivings at their New Hampshire homestead. 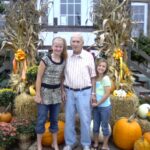 KT – “I miss going to the Amana’s with my father. He has passed and while he hated the changing of the seasons to cold weather, he loved eating and visiting the Amanas with his grandchildren. We always started with breakfast at the Colony Inn. For the best thin pancakes and sorghum, along with fresh fried potatoes, eggs, and English muffin toast with homemade strawberry jam. Then we had to head to the General Store for candy purchases usually Swedish fish, Rock Candy, and Red Licorice. If we had visitors with us we would tour the Woolen Mills and the Furniture Store and of course the Christmas Store with the most beautiful decorations.

“The Amanas is the closest thing we have to a fun Oktoberfest setting and environment. Such a great little historic village with many family memories for me!” Editor’s note: The girls are grown now. One lives in Nashville and the other attends Luther College. 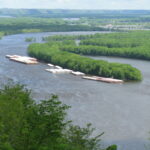 The Mississippi River stretches from Minnesota to the Gulf Coast.

S&MN – “Each fall, we would invite a couple of language teaching assistants, recently arrived in Minnesota from France to a ride down the Mississippi River to view the changing colors of the leaves. Conversation on the ride to Wisconsin gave us a chance to learn more about each of them and their first impressions of their stay in the US. We would follow the Mississippi River down the Wisconsin side to Stockholm, Wisconsin, where we would lunch at a small cafe, visit the Amish quilt shop, gift shops, and antique stores.  This included touring a small museum of the original post office.

We would stop at the scenic Maiden Rock overlook and Lake Pepin. Did you know that Water Skis were invented there?  We’d take in the Laura Ingalls Wilder Museum in Pepin, Wisconsin, and visit the replica of the Little House in the Big Woods.  We shared stories and explained about the Little House book and movie series as we could.  We loved making connections to life in France during the same time period of the 1870s and learning which facts were most interesting to the young interns who had read the book series in France. Thirty years ago, the language assistants would have been fans of the TV series by the same name La Petite Maison Sur La Prairie. It was a popular series on television in France. In recent years, the students would have been given details learned on the show by their mothers who had loved the show as children.

Conversations on the way back to the Twin Cities would be filled with questions that were often spurred by what we saw and that most usually unanswered.  These conversations provided us with opportunities for conversation topics in the months that followed as many were inspired to read the series in English during their stay after the visit.”

New Adventures for a New Englander

SH – “The first autumn after we moved to Wisconsin from New Hampshire I had a wonderful introduction to the fall bird and waterfowl migration. I had never experienced anything like it. Horicon Marsh is huge!  Part of it is federal lands and part is state lands. I was not sure what to expect when it was suggested that we join my husband’s parents for a Sunday outing. I was totally amazed and awed at the sheer numbers of birds that were flying, landing, and swimming in the water. A busy main state highway that runs across the top area of the marsh. Lots and lots of cars were parked on the edges of the road with families, watching out for traffic. People were wandering about taking in the sights.
When our daughters were young, we made sure that they also had the opportunity to see this mighty spectacle. I still enjoy going across that state highway and exploring the area. A recent addition is a park-like area with a paved one-way auto road with pull-outs and informational signage. Trails to hike and a boardwalk that has a gazebo with scopes get visitors out into the marsh for better viewing. There are also various dykes and dirt roads to boat landings to explore. After the autumn rush of migration, it is still a fun place to visit, and so far no matter when we visit, I have never been disappointed. It seems like we are always able to find some wildlife and sometimes get great photos of birds we don’t see on a regular basis.”

SBF – “When I bought a house in FL her son told me that the lady who had lived there before had loved her house and property very much. After I moved in with my friend, Jinx, on several nights I awoke to the TV sounds in the family room so I would go turn it off. This went on for 3-4 nights.  Finally, on the fifth night I turned it off once more, but I stood by it and spoke to the previous owner. I told her I loved the house and lovely plants around it, a ginger bush, a beautiful poinsettia bush, and a pretty plant on the backyard fence. Then I promised I would try to care for them as best as I could. “But please,” I asked, “could you not turn on the TV after we go to bed at night as I had to get up to go to work 5 days a week.”
The TV never went on at night after that!”
Thanks for sharing autumn stories!