Where do You find Antler Sheds?

One February morning I took a short work break and walked through the woods near a parking lot and a busy road.  I wasn’t paying attention to where I was walking until I stepped on a hard-pointy object. 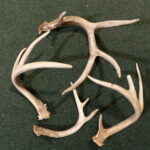 Finding a matching pair is unusual.

It was a huge deer antler that a buck had recently dropped. Finding it made my day and converted me into a shed hunter.

What is a deer shed?

All male members of the deer family and caribou females grow a new pair of antlers every year. They’re not horns. Sheep and goats grow horns, which stay on their head for life and are made of the same material as human fingernails.  Antlers, in contrast, are bones of mostly calcium. They are the only bones that grow outside the body and are nourished by a blood-rich skin called velvet.

Why do deer drop their antlers?

Bucks begin growing antlers around April in most places. By September they are fully formed. They rub their antlers on trees to remove the no longer needed velvet, and the now polished bones are ready for jousts between males to figure out who’s the boss buck.  By Christmas a dropping testosterone level causes the antlers to fall off.  These “cast” or “shed” antlers can hit the ground as early as Christmas or as late as early April. But February is a prime time to search for them.

Where can I look for deer sheds?

Obviously, the best place to look for sheds is where deer hang out.  Tracks, droppings, and actual deer sightings help locate prime places. In this modern era, some of the biggest bucks live in suburban and urban areas, so it’s possible to saunter out into the backyard and find one. Wooded city parks and timbered wooded corridors are also prime spots.  Be sure to have permission before venturing on private land. 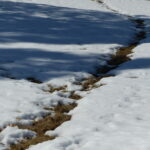 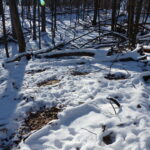 Sheds can be found where deer rest. 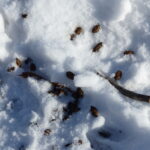 There’s more to shed hunting than we’re putting in this short blog.  An outstanding resource is SHED HUNTING, A Guide To Finding White-Tailed Deer Antlers by Joe Shead (yup that’s his real name, and it’s pronounced “shed).  For information check out www.goshedhunting.com/shop.