Why Do Raccoons Tear Up Feeders?

What to Do About Raccoons

One June morning we peered out our dining room window to see bird feeder carnage. The shepherd’s hook that holds up suet and seed feeders were bent and the board it was anchored in shattered. The feeders were gone. One we later found in the little pond we have. We were frustrated and a bit angry. 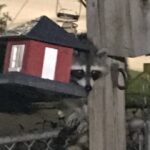 Raccoons were the culprits. Several had raided the night before. Young raccoons are loved everywhere for their “cuteness”. We like them too, but damage can’t be ignored, so we took action.

Raccoons are amazingly successful animals. They live nearly everywhere in the continental United States and southern Canada. A few years ago, our son sent us a photo he snapped of a raccoon in a dumpster in our nation’s largest city. They thrive in urban, suburban, and rural areas, especially those that have streams, rivers, or lakes nearby and denning places. Those could be hollow trees, road culverts, or even barns, garages, and house attics.

Raccoons were released in Russia and Japan, where they thrive and are expanding their range. Away from North America they are an invasive species causing ecological problems and probably raiding chicken coops and bird feeders in their new countries.

What do Raccoons Eat?

They are successful, in part, because of their eclectic diet. True omnivores, raccoons enjoy dining on carrion, frogs, crayfish, mice, dog and cat food, birdseed, fruit, and a host of other things, even human food scraps tossed in trash cans.

How We Foil the Raccoons 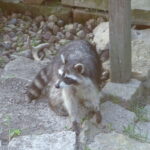 Raccoons forage wherever they find food.

We don’t want to physically harm the raccoons that damaged our bird feeding station so we are doing these things: 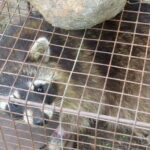 This raccoon readily entered the box trap to eat the sardines.

The night after the raccoons ruined our feeders, we did one other thing. We have a metal box trap that catches, but doesn’t harm, animals. We set it near the feeder with a sardine for bait. A big raccoon went right in. We let him stay there for a while so he could ponder his captivity. Then we sprayed him with water from the hose and opened the trap. He zoomed out like greased lightning, but he may have enjoyed the stay. It was a hot night and the hose water probably cooled him down. We hope he remembers being confined for a short while and stays away.

So far, these actions have worked. Our chickens are healthy and safe. And, no damage to feeders will happen when raccoons prowl.