Rich Patterson and Kammi Matson of the Popsie Fish Company

In early July we enjoyed an amazing natural phenomenon at the Campbell Creek Science Center in Anchorage, AK.  We walked with our daughter to the small stream that gives the Center its name and spotted splotches of red in quieter stretches of the Creek.

Sockeye Salmon were resting there after wriggling up rushing riffles and rapids. Seeing the fish brought back Rich’s 50-year memory of the scientific work he did on this fish species a half-century before. 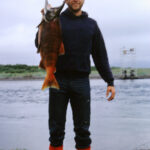 In 1972 he was stationed at the Ugashik Tower on a remote river about 250 miles southwest of Anchorage. The task of his crew was to count Red Salmon migrating upstream and to report numbers to the head biologist in the town of King Salmon. Counting was done by perching in a riverbank tower made of aluminum scaffolding, peering into the water, and counting fish swimming by.

At first, work was boring. No salmon were in the river. Then a miraculous change happened. Rich glanced downstream to view a river of red plowing upstream against the strong current. For two weeks, night and day, salmon passed the tower on their way upstream.

Five species of salmon are native to North America while a sixth only lives in Asia.  All are anadromous, meaning that they hatch in freshwater but spend much of their life in the sea before returning to their natal stream to spawn. While other Pacific salmon like the King, Chum, Silver, and Pink, feed on chunky animals, mostly small fish, Sockeyes, or Reds as they are called in Alaska, prefer different food.

What is Unique About Sockeye?

Most Sockeyes spawn in the gravel of small tributary streams that feed Alaska’s vast lakes of Iliamna, Becherof, Naknek, Ugashik, and others. Tiny fish descend the stream and usually spend two years swimming around the lake straining plankton from the water until they reach roughly sardine size. Then, on a few April nights, millions of salmon, called smolts, descend the big rivers to Bristol Bay. For the next two years, they circle the vast Pacific once or twice, eating zooplankton, small fish, and squid. They swim with their mouths open so their filter-like gills can strain tiny animals from the water.

When a smolt enters the Bay at two years old it weighs under an ounce. Think of that! When it returns from the nutrient-rich ocean two years later it weighs between six and 12 pounds!

For most of their lives, Red Salmon are not red. They’re silvery. When entering freshwater their skin quickly turns bright red and their heads green. Males grow a formidable-looking hooked snout. On their journey, they cross a  lake and mate in small feeder streams beyond.

Sockeye are probably the most delicious of all fish, eagerly caught by commercial fishers based in Bristol Bay to be canned, flash frozen, or shipped fresh to consumers around the world. The best-tasting fish are caught before their skin reddens, but their rich flesh is always bright red.

How Do We Avoid Overfishing? 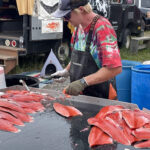 Most people realize that overfishing devastated the once vast schools of  Atlantic Cod off New England and Canada. So, how can science work with commercial and sport fishers to ensure that Alaska’s red salmon remain abundant while providing a generous harvest of delicious food?

In theory, it’s simple. Let enough fish “escape” nets and hooks to spawn a new generation and add the fertility of their dead bodies into the water to nourish the plankton that feed youthful salmon. In practice, it’s more complex.

Biologists rely on electronics and human eyes to make sure enough salmon ascend rivers to keep numbers high and sustainable. Fishers are allowed to catch the surplus. It works. Vast numbers of Red Salmon, perhaps as many as 50 million, were caught and shipped in 2022 while plenty of escapees spawned. Anyone can enjoy eating a salmon filet knowing it’s not sending Red Salmon the way of the  Atlantic Cod.

How Can You Get the BEST Sockeye in Iowa?

We love eating Sockeye Salmon and prefer grilling it over a gentle wood fire. The trouble is we live in Iowa. No salmon here, but a few years ago we were able to buy Egegik River fish from a local meat market that has since gone out of business. We now order from the Popsie Fish Company, which sends ten pounds of frozen filets to our home.

Popsie caught these fish near Alaska’s second largest lake, Becharof. That’s close to where Rich worked years ago at Ugashik. The Egegik River flows from Lake Becharof to Bristol Bay.

To order fish go to Popsie’s website. To see Sockeye in their red-colored glory without the need to fly to the distant Alaska Peninsula visit the Campbell Creek Science Center in mid-July in Anchorage and walk along a pleasant trail to the Creek. Its salmon run is modest in size but easily accessed.